- details below - via TheGuardian, written by Mark Sweney 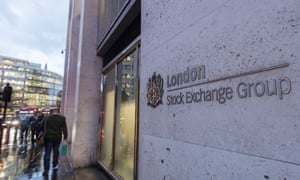 The London Stock Exchange Group has agreed a $27bn (£22bn) deal to buy Refinitiv in a move that will transform it into a UK-headquartered, global rival to Michael Bloomberg’s financial news and data business.

The all-share deal will allow LSE to take control of Refinitiv, whose Eikon terminals on trading floors challenge those provided by Bloomberg, from a consortium led by Blackstone and including Thomson Reuters, which owns the Reuters news service.

LSEG’s shares rose 5% to £69.50 on the news of the finalisation of the deal, giving the business a stockmarket value of £24bn. LSEG’s share price has risen by more than 60% over the last year.

“The acquisition of Refinitiv is transformational,”

“It is a rare and compelling opportunity to combine two world class businesses and create a global financial infrastructure leader. We will continue to be a global business headquartered in the UK.”

Schwimmer said the deal would increase its presence in the US, the world’s biggest financial market, and also allow it to expand in Asia and emerging markets.

He said that increasing LSEG’s international exposure is not a response to Brexit and that the company is prepared for a no-deal scenario.

“LSEG has been prepared for whatever may come through Brexit,”

“We are already diversified across regions and by currencies. This transaction helps us become more global. This is not about Brexit.”

The finance chief, David Warren, said there would be job cuts, as part of £350m of cost savings over the next five years, but would not say how many redundancies there would be.

“I can’t quantify them, it would be too early to do that,” he said. “[There will be] employee related efficiencies.”

He said there is a lot of overlap in areas including technology, property, and corporate functions.

“Those are the main areas of opportunity [for cost savings],”

Under the deal Refinitiv shareholders will own 37% of the combined group, with Thomson Reuters holding a 15% stake. Blackstone moved to take a majority stake in Thomson Reuters’ financial and risk business just last year, subsequently renaming it Refinitiv, for $20bn.

Autenti unites polish banks in a joint investment of £3.4M :)

New year, new deals. And I have to admit - it kicked off quite heavily! Big players, big number, big names! #Tencent, #Visa, #Google, #PayU, #Apple, #MC... - well, check below by yourself. Normally I